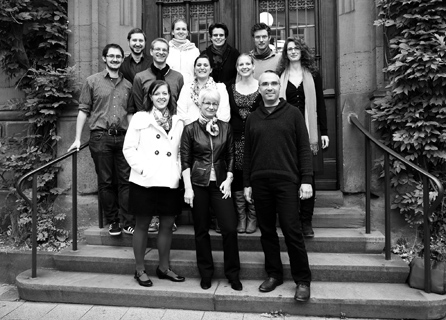 As of 1. March 2010, the Network Aging Research of Heidelberg University has established a „Graduate Program Dementia“ under the scientific management of Prof. Dr. Andreas Kruse and Prof. Dr. Konrad Beyreuther. The interdisciplinary approach of the topic “Dementia” wants to have a signalling effect for the so necessary cooperation of health-care professions in an highly differentiated health system.

The graduate program contributes to

The program is characterized by

The following research areas and disciplines are part of the program

Joint events of the program take place at the NAR of the Heidelberg University.

Experience the changes of Aging

An increasing life expectancy, improved medical and hygienic conditions will ensure that in 2050, more than 1/3 of all people in Germany are 60 yrs. and older. People of the age group 50 and above, have become an interesting target group for the industry. To offer relevant products and services, it is necessary to understand the needs of older people. Aging Suits are used to show younger people typical restrictions of older age e.g. ankylosis, loss of strength or sensory losses. The suits provide this experience and should increase the empathy for older people.

The aim of this project is to show the influence of an aging suit on gait and subjective perception of age. Data of gait analysis and subjective perception of age within different age groups will be collected and compared. So far, there are no existing studies, which evaluate the potential and the limits of these kinds of simulation. With this data we want to quantify the objective and subjective changes of older age. These results shall help the industry to offer better products and services for older people and could give impulses to improve the education and training of helping professions.

Summary of the Symposium "Age Simulation in Science and Practice" on 10. January 2014

On 10. January 2014 the Network Aging Research hosted a symposium on the topic of “Age simulation in Science and Practice”. The event took place at the Internationales Wissenschaftsforum Heidelberg (IWH) and was supported by the Klaus Tschira Stiftung (KTS). A total of about 50 participants from Germany, Austria and Switzerland attended the symposium. The talks were structured by the following fields:

In the first part, Dr. Andreas Lauenroth (gait analysis with aging simulation suits) and Laura Schmidt (aging simulation suits from a psychological perspective) introduced first results of their scientific studies in which aging suits were used. They were followed by Jürgen Kupferschmid (PR & Communication), Petra Sack (RNV GmbH) and Hartmut Vöhringer (Johanneshaus Bad Wildbad) who talked about the possibilities for the usage of the aging suits in training and further training in different fields. PD Dr. Christoph Oberlinner (BASF AG) and Andreas Mürdter (Daimler AG) gave an insight on how large companies deal with the challenges and limits of age simulation in product development.

The event was completed with a panel discussion in which all the speakers answered questions of the auditorium. The participants from the fields of research, design, product development, industry, care, public institutions and gerontology, intensively discussed possibilities for the usage of aging suits but also limits and too high expectations. It was pointed out, that this form of age simulation can lead to a one sided, partially negative image of aging. But all came to the agreement, that aging suits are a very vivid method for gaining sensibility to the process of aging. This method should be used more for the sensitization of professional groups that work daily with older patients or clients.

There is plenty of evidence that the relationship between mental and physical health influences physical wellbeing. It has been shownthat cognitive rehabilitation results in improved physical performance (Lautenschläger, 2008; Hillman, 2008). There is, however, evidence supporting a reverse relationship too. It seems that mild physical training exerts a positive influence on cognition. Same results are described by authors who investigated the effects of dual or multi tasking as well as video-games playing on cognitive abilities (Anguera et al., 2013; Enriquez-Geppert, Huster& Herrmann, 2013). The aforementioned evidence, however, is until now in no review paper reported. Purpose of this study is, therefore, to present in a review article what is the influence of physical exercise combined with cognitive training on cognitive abilities. Theimportance of this effort lays in its clinical implications, including the opportunity to improve cognitive rehabilitation strategies.

The topic of the junior research group „Psychological resources and problems in old age (PRP-Age)“ is the psychology of aging. Specifically, our goal is to integrate lifespan developmental research on normal and successful aging with clinical research on pathological aging. As the result of our collaboration with colleagues from other disciplines (clinical psychology, gero-psychiatry, social and media sciences), we are conducting studies on emotional experience in later adulthood, dementia worries in normal and clinical populations as well as media portrayals of older people (with dementia). In a current project, we investigate ways of developing and implementing lifespan-oriented psychotherapeutic interventions in long-term care.

Climate change is one of the largest potential threats to global health. While it is widely accepted that vulnerabilities to the health impact of climate change will vary according to gender, socio-economic status, education, social networks and immobility, the specific vulnerability of the elderly has received very little scientific attention so far. Some studies from UK and Sweden indicate that the elderly might not only be more vulnerable, particularly to heat, air pollution and climate-sensitive infectious diseases, but they may also have a larger climate footprint, thus at the same time disproportionately contributing to and suffering from climate change. Studies have also shown that the elderly male population are more reluctant to consider climate-induced hazards a threat to their own health.

In addition to the topic, the set up of this junior group is quite innovative: it spans to universities with their research capacity on aging and climate:

The postdoc, Dr. Barbara Schumann is located in Umeå. Her topic is the historical analysis of the impact of climate change on population health in Väster Botten Province.

The two doctoral students – details are based at the NAR in Heidelberg. Although the students will be supervised by Prof. R. Sauerborn of the Heidelberg Medical Faculty and other fellows of the NAR, the group will have regular meetings, skype and personal to combine their methods skills and exchange research results.

Two doctoral scholarships were awarded on July 17, 2012 on the following topics 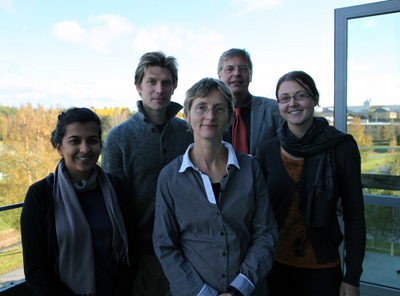 The first meeting & research seminar of the Junior Group members with their supervisors form Germany and Sweden was held in Umea, Sept. 24-26, 2012.