How many Alzheimer researchers are there worldwide?

Worldwide there are close to 25.000 Alzheimer Researchers. The reason why this is impressive is that at the moment there are 26,6 Million Alzheimer patients in the world, meaning one scientist for 1000 Alzheimer patients. That is good news for an issue that all of us will, at one point, be concerned with- we just have to get old enough.

When you look at the results of this study, you see that most of the publishing’s were written by only a few of the scientists.

Of course Alzheimer’s is a subject that draws many scientists. For one scientist it’s his life-theme, for others it’s the opportunity to publish something fast and then withdraw from this field- which is mostly characterized by competition. You have to note that most papers that these 25.000 Alzheimer’s researchers publish, are basically about one single protein. Therefore the competitive pressure is very large. But one has to recognize that most of these scientists come from the USA. This country undertakes tremendous efforts to adequately research this subject. Between the Top 100 Scientists are less than a dozen from Germany and of course that is not enough, especially if you look at the german numbers. In this country we have approx. 1,2 Million Alzheimer’s patients and we should, if we calculate this number to 1000 Alzheimer’s patients, come up with at least 1200 scientists. That is not too much to ask for. The German Center of Neurodegenerative Diseases, which officially opens on the 23. June 2009 in Bonn, will have about 600-700 scientists research Alzheimer’s and other neurodegenerative diseases. There are other eminent Alzheimer’s researchers outside of this center, so these 1200 scientists could actually be achieved. Germany would then have its part in the world performance.

In this outline work about Alzheimer’s research it was shown, how important networking is. The ones that were especially good networked published most of the papers and the lone fighters are nowhere to be found. How important is collective research, networking?

That is a very good question. Science is not going to be better that way but way more efficient. Times have completely changed. When I started with Alzheimer’s research, I had to establish almost all techniques in my laboratory and that of course is extremely insufficient. I am a protein specialist, others are microscopy specialists, the next one is a doctor who knows his patients very well. The next knows about nutrition problems, the analysis of risk-factors, the maintenance or care research, in neuropathology and so forth. A graphic in this publication shows impressively that researchers who work together, also appear at the very top of this list of the Top 100 researchers in the field of Alzheimer’s and being some of the leading researchers. This important understanding has general meaning and was therefore integrated in the concept of the Network Aging Research.
The Network Aging Research is the only institution in Germany that combines all areas of aging research. From the biological fundamental research to biomedical research, from psychology to sociology, to gerontology, to philosophy, to the science of sport and economy. Almost all fields we have at this university are represented. We need “ Deep-drillers” who meet at the depth and not at the surface to maybe drink a coffee together. It’s not only about cells and molecules, it is also about dignity, feelings and pain, sorrows and anxiety about the future. All these topics must be usefully and scientifically worked on, so that the achieved results last and find their way into practice. One of the newer results that was established with the research of Alzheimer’s Disease was that the patient cannot be cured, that his brain is “empty” on many parts of his brain- the majority of the nerve cells have died. You cannot treat an empty brain! It has already been published in 1998 that a patient at the early stage of Alzheimer’s Disease has already lost 60% of nerve cells at certain parts of his brain. That is like there is a piece missing of an interurban power supply line. There is no more power running through in this region. And if we go into the next stages of the disease, 3 years later it is 60 to 80% of nerve cells in that particular section of the brain and in the last stage, we call it the severe stage, 90% of the nerve cells are destroyed. You will not get them back and if in the future, stem cell technology will get it right, is the big question- for it is the brain of a human being and this brain has been shaped a whole life. If new nerve cells can really re-establish this old, this wonderful, unique organ is of course an open question.

What advice can you give a young scientist on his way? To specialize early or not loose sight of other fields?

I think both is important. Interesting is the specialist that is able to communicate with other specialists. That really is the great strength of these networkers. To learn the scientific language of other fields and understand its contents requires  a certain amount of effort. I recommend all young students to look at other fields. We have the extracurricular studies, the post graduate programs like the NAR-Kolleg, the Marsilius-Kolleg and special seminars. The NAR also offers seminars for the public and the public includes of course the scientists to be. We try to select speakers and topics for these seminars that can understandably describe the complex topic of aging and the changes to the human being on all levels associated with aging- mentally, physically, psychological. All events of the Network Aging Research have a medical component, one that talks on the population situation and one that describes the human being as a unique creature, a creative human, a music loving or physically active person.

What perspectives, in terms of the curability of the diseases, to you see in the future?

We presently are at the year 103 after the description of the first Alzheimer’s case. Alois Alzheimer (1864-1915) had a patient who died of Alzheimer’s at the age of 56 -something that is relatively rare. Meanwhile, there are a handful of new agents against Alzheimer’s Dementia, who are in the second last and last stage of testing to stop the process, so we can look into the future slightly optimistic. But an appropriate therapy will only come when we start at a very early stage. The citizen is used to treat problems when they occur and not before. Prevention is a topic that can be endlessly discussed without really strengthening the responsibility of each individual. But there are a few really suggestive proposals. The Network Aging Research just hosted a seminar on the subject of therapy with Dementia. People, who did not get the chance to attend the seminar, are very welcome to go to our homepage and view the presentations or look at the book.

In 2050 we will not have 1,2 Million Alzheimer’s patients but 4,8 Million, if science is not moving forward. But I am very convinced that we will reduce today’s numbers of Alzheimer’s patients to half in 2050. But therefore we must motivate the population to take prevention into their own hands and implement the currently developed preventive measures. 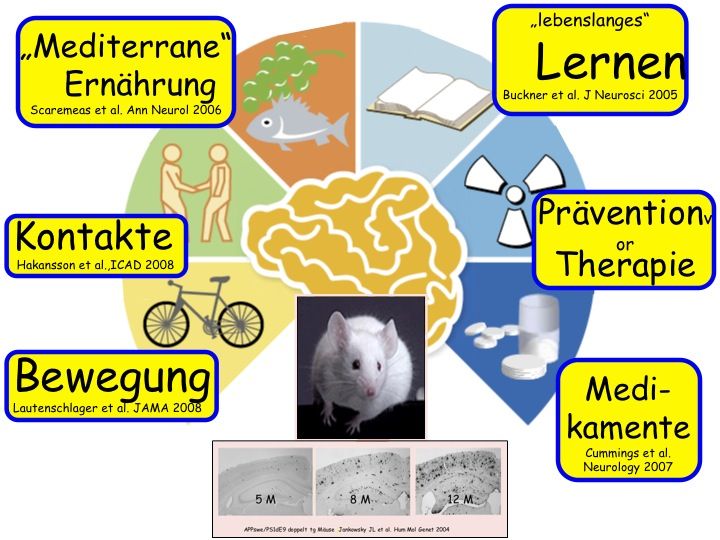 Konrad Beyreuther, born in 1941, Director, Researcher and "Bundesverdienstkreuzträger", member of the Heidelberg Academy of Sciences and Humanities and the German Academy of Sciences Leopoldina, member of the State Council of Baden-Württemberg from February 2001 until June 2006. He was decisively involved in the discovery of the chemical structure of the characterictic Amyloid-deposits of the Alzheimer disease and its genes. Beyreuther received numerous honours, the latest being the "Lennox K. Black International Prize for Excellence in medicine" of the Thomas Jefferson University of Philadelphia in collaboration with Colin L. Masters, University of Melbourne.

Mental and physical fitness, a continuous curiosity, as well as a balanced diet, rich on vitamins and Omega-3 folic acids - without neglecting enjoyment - is in his opinion the best prevention.

He is connected to the music festival "Heidelberger Frühling" as the chairman of their "Freundeskreis".